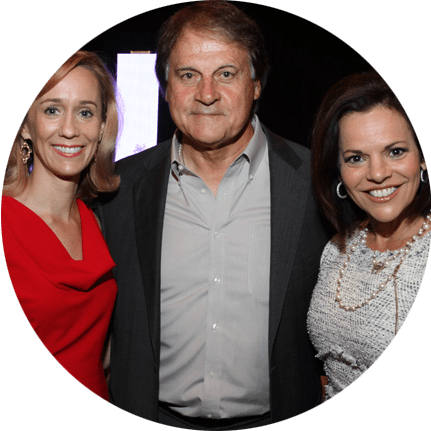 Nearly 1,000 guests attended our 7th Annual Community Breakfast on May 6 at the Arizona Biltmore Resort, and contributed $382,000 to provide respite and palliative care to children with life-limiting conditions and their families at The Board of Visitors Ryan House this year.

Honorary Chair and three-time World Series Champion, Baseball Hall of Famer and Arizona Diamondbacks Chief Baseball Officer, Tony La Russa, said, “What Ryan House is providing these children improves the quality of life for the entire family. It’s unique, and it’s powerful. And it’s up to the rest of us, as a community – as a team – to get the funding they need. That’s why we’re here today.”

Later in the program La Russa made his own personal gift and promised to double it if the Diamondbacks won that afternoon against the Rockies. They did. Many Ryan House supporters in the audience met Tony’s challenge and doubled their gifts that afternoon. “Tony motivated everyone to make their best gift,” said Alyssa Crockett, executive director. “It was a truly inspirational morning.”

Ryan House mom Jacque Wagner, shared with guests about her family’s time at Ryan House in a beautiful tribute to her daughter, Katie. Ryan Cottor gave the blessing, and 3TV’s Your Life A-Z Co-Host, Marlene Galan Woods, served as the event’s emcee. Diamondbacks’ organist Bobby Freeman performed the National Anthem and later led Diamondbacks legend Luis “Gonzo” Gonzales and J.J. Putz and other guests in a rousing performance of “Take Me Out to the Ballgame.”

The Grand Slam Raffle raised $28,000 and featured three unique items – a Legends Dinner at Tarbell’s Table One, a training day at Salt River Fields for a youth baseball/softball team, and luxury staycation/vacation courtesy of The Phoenician and US Airways.

Planning has already started for the 2016 Community Breakfast. Please email development@ryanhouse.org to become a table captain, sponsor or volunteer.